Cross-border payments currently operate based on the existing MT format for bank-to-bank messaging and settlements. Starting in March 2023, SWIFT and the industry as a whole will migrate to ISO 20022, thereby adopting a global and open messaging standard which all market participants and associated infrastructure can adhere to.

ISO 20022 is a global and open standard for financial messaging specified by the International Organization for Standardization (ISO). Aiming to be the common language for financial institutions, financial market infrastructure, and related participants, the adoption of ISO 20022 will unify current practices based on fragmented standards and provide the industry with highly structured and enriched data for end-to-end automation on an international scale. Along with SWIFT, a growing number of payment infrastructures have made the decision to migrate to ISO 20022 to address the challenges associated with increasing costs and inefficient processing in areas such as financial crime mitigation, operations, and data automation.

Cross-border customer payments are settled through financial messaging systems such as SWIFT and the clearing systems of respective countries. Although SWIFT uses a message format called MT format for interbank settlements, the flow of payment operates on fragmented standards due to local requirements and practices and service specifications set by financial institutions.

SWIFT will start migration to ISO 20022-based messaging in March 2023 with a coexistence period continuing till November 2025. During the coexistence period, both ISO 20022 messages and current MT formats will be supported. ISO 20022 will be adopted as a common standard across the flow of payment, allowing enriched data to be delivered end-to-end for faster processing, visibility and interoperability.

MT, the current conventional standard, has limitations such as limited data fields and incompatible structures for data processing. As a result, many MT users customize the data settings in the MT data fields in order to reflect their messaging needs. This leads to disruptions in payment data processing by financial institutions and the inability to fully automate.
ISO 20022 messages are significantly longer, allowing more data to be entered in a hierarchical, structured manner.
For example, in MT format, payment beneficiary information is entered in a narrative manner in a single field (field 59) which includes multiple pieces of information such as the beneficiary name, address, city, and country.
In an ISO 20022 message, payment beneficiary information is entered in the creditor field, which includes the name and address as well as additional structured elements including street name, building name, post code, and town name.
Payment Beneficiary Information in MT format
Payment Beneficiary Information in ISO 20022 Message 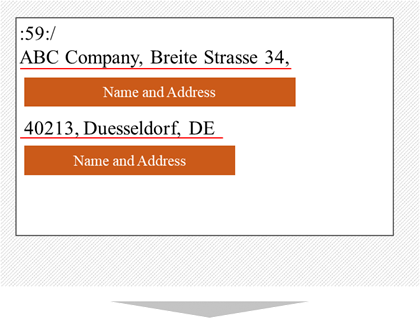 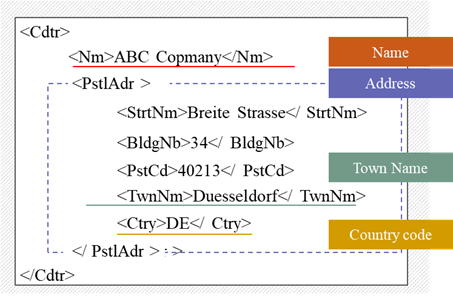 SWIFT's Vision for the ISO 20022 Migration

The industry migration to ISO 20022 for payment messages across the SWIFT network will commence in March 2023 and end in November 2025. Effective March 2023 when the coexistence period starts, banks will be prepared to start receiving multi-format messages using MT and ISO 20022 via SWIFT. As for payment origination, while all parties across the industry move forward to adopt ISO 20022, migration timelines will vary.

MUFG will launch ISO 20022-based services firstly with incoming remittances in March 2023. MUFG will be prepared to receive incoming ISO 20022-based payments, which will then be converted into MT format before transaction processing and credit entries to customer accounts. While the conversion process will comply with the SWIFT guidelines, due to the increased data capacity of ISO 20022 compared to MT format, there is a possibility that for inward remittances in ISO 20022, transaction reports or account statements may not fully reflect the enriched data of ISO 20022. This interim solution will be terminated once MUFG's ISO 20022-based payment processing and information reporting are deployed. More details are available in the FAQ.

As for the origination service, ISO 20022-based outgoing transfers will be launched in November 2023 at selected locations and gradually deployed across MUFG's global footprint. Since ISO 20022 will be deployed as the common language throughout the payment life cycle, MUFG anticipates that customers will be expected to make some enhancements to their internal systems in order to accommodate the new specifications associated with the ISO 20022 standards. Structuring of beneficiary address information to separately specify beneficiary town and country information is an example of new specifications.
(as of November 7, 2022)