The Origins of Our Bank

Left: Marunouchi during the late Meiji period.
Right: Photos of each bank at the time. From the top: Mitsubishi Bank, The Bank of Tokyo, Sanwa Bank, Tokai Bank.
Prologue
MUFG Bank today descends from a number of illustrious predecessor banks, dating as far back as the seventeenth century, but gaining momentum after the Meiji Restoration of 1868 and accelerating rapidly in the twentieth century. Our modern history began with revolution. When the Meiji Restoration ended the Tokugawa shogunate, the shogunate's business interests were disbanded and made available to aspiring entrepreneurs. The origins of Sanwa Bank go back to the early Tokugawa Period and the Konoike Money Exchange. The Konoike family, who were descended from samurai, began in sake-brewing and the shipping business in 1656 and moved into financial lending, primarily to the powerful land-owning daimyo class in the Osaka region. In 1670, the money exchange was among the Big Ten organizations chartered by the shogunate to provide financial services to the Japanese government. 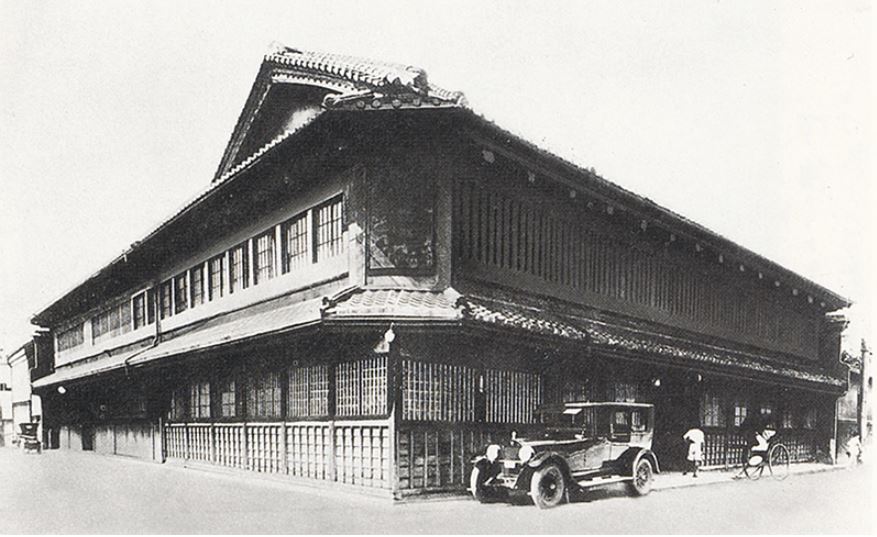 The Konoike Bank remained a local institution until 1877, not long after the Meiji Restoration (1868), when it was awarded a national banking charter.

In 1870 a former samurai, Yataro Iwasaki, set up his own company, Tsukumo Shokai (renamed Mitsubishi Shokai in 1873), which was largely involved in shipping. Mitsubishi supplied transport ships to the Japanese government that helped defeat the Satsuma Rebellion of 1877, the most serious challenge to the new Meiji regime — thus intertwining the company with the rise of the modern Japanese state. It is said that the founder of Mitsubishi Shokai, Yataro Iwasaki, hung this Okame mask in the Tokyo head office around 1874. Okame is a female character in Japanese traditional theatre who brings happiness and good fortune. 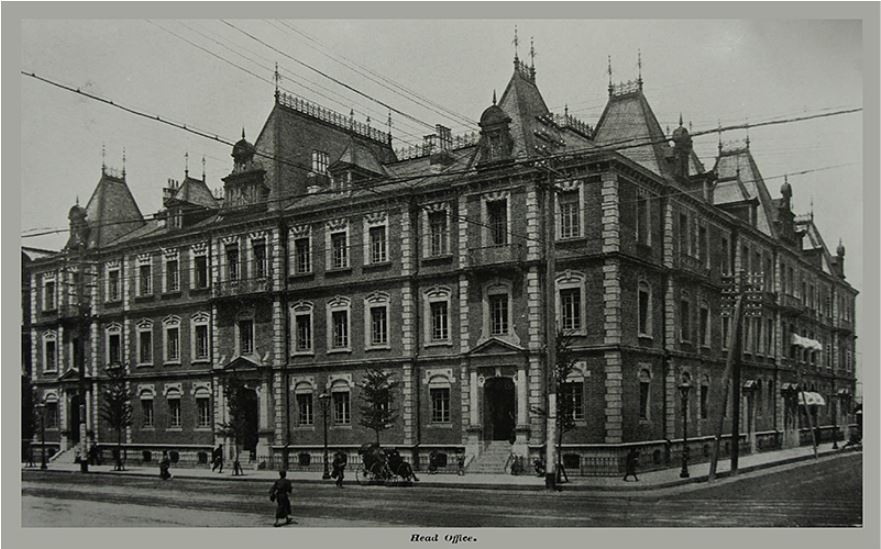 Mitsubishi Bank's head office in Marunouchi during the Meiji period.

In 1880, Yataro established the Mitsubishi Kawase-ten (Exchange Store), a financial exchange house that also engaged in the warehousing business. In 1885, Mitsubishi took over the management of the 119th National Bank and formally entered the financial services industry, adopting the name Mitsubishi Bank in 1919.

Mitsubishi Bank prospered during the tumultuous industrialization of the early twentieth century and opened a number of international offices, including London and New York in 1920, but its scope and organization shrank in the chaos after World War Two.

After the San Francisco Peace Treaty was signed, the bank gradually regained strength, reopening its offices in New York and London and establishing itself as a powerful trade coordination partner increasingly involved in corporate finance.

During the 1960s, the bank financed raw-material purchases, helped to build factories that turned out finished products, and promoted the distribution of the products worldwide, becoming an integral contributor to Japan's export-led growth. During the 1970s, the bank opened several more international offices, including a subsidiary, Mitsubishi Bank of California, in 1972.

The Bank of Tokyo, Ltd.

The Yokohama Specie Bank opened for business in Japan and New York in 1880 before setting up another office in London in 1881, securing an international foothold that has become the basis for MUFG Bank’s current global presence. The bank was named after the specie, a silver coin used as an international currency for settling payments among traders.

The Yokohama Specie Bank actively participated in currency exchange and trade financing businesses in Asia. Already, by the second decade of the twentieth century, it had established a network of representative offices in almost all the major trading centers in the Pacific region and the world’s financial capitals. 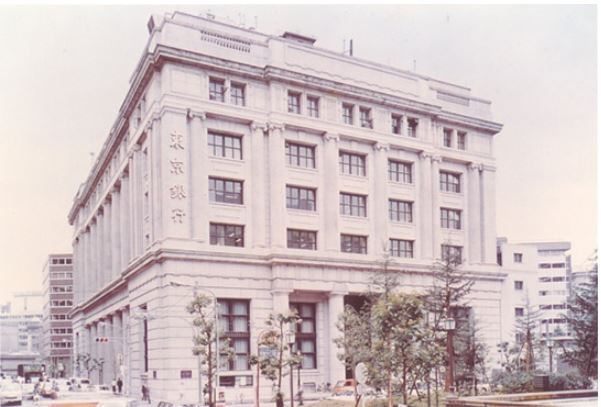 The Bank of Tokyo's Head Office.

In 1945, the Yokohama Specie Bank was reorganized as the Bank of Tokyo, “the new-born bank for a reborn Japan”. The company name was chosen through a poll of its employees. The bank’s trade finance and trade settlement services initially contributed greatly to increasing exports for Japanese companies, and later to revitalizing the Japanese economy.

In 1954, the Bank of Tokyo turned itself into a specialized foreign exchange bank in line with the Foreign Exchange Bank Act. It has since been active on financial markets in New York, London, and elsewhere, taking the lead in internationalization of the Japanese economy and Japanese banks. The bank explored ways of raising funds in foreign currencies. It created a yen-yuan settlement system to help normalize trading ties with China at a time when payments were not allowed in U.S. dollars. The bank also used its strong overseas network to assist Japanese companies in advancing overseas.

The bank also played a role beyond that of a single private bank through its significant contributions to Japan’s currency diplomacy and economic diplomacy in the Asian region through public-private partnerships with the Finance Ministry and the Japan Bank for International Cooperation. This tradition of active involvement in overseas expansion has been passed on to succeeding generations.

In the early 1930s, Konoike's commercial operations began to lose ground to larger banks that were financing the rapidly expanding heavy-industry sector, and it merged with Yamaguchi Bank and Sanjushi Bank in 1933. After the merger the new entity, based in Osaka and tied to textile production and other light industries, took the name Sanwa (san meaning "three," wa meaning "harmony").

Sanwa was a leader in expanding banking services to the general public, including individual consumers and small businesses. To serve Japanese exporters, the bank opened its first international branch, in San Francisco, in 1953.

In the 1980s and '90s, Sanwa was a pioneer in the installation of ATMs and the promotion of online banking in Japan, and continued to develop its strong international network. In 1995, it was the world's top bank in terms of assets, moving down to #2 after the merger of the Bank of Tokyo and Mitsubishi Bank in 1996.

Based in Nagoya, Tokai Bank was formed by the merger of three local banks in 1941 about six months before Japan entered the Second World War.

During the post-World War Two reorganization of the Japanese banking industry, Tokai remained largely intact, and in 1947 it was awarded a foreign exchange license. Tokai made major contributions, predominantly in the textile industry, to the postwar revitalization of the Chukyo region, where Nagoya is located. It also supported the rebuilding efforts following the Ise Bay Typhoon of 1959 (also known as Super Typhoon Vera), one of the strongest typhoons to hit Japan in recorded history . An advert promoting the opening of Tokai Bank (1941)

Left: Exhibit in the lobby of Tokai Bank's head office,
in commemoration of the opening of its London branch
(1963)
Right: Tokai Bank's New York office (1965)

Tokai Bank's contributions included the inauguration of checking accounts in a relatively unsophisticated market in 1960 and starting the country's first online money-order system in 1965. Tokai opened its first overseas branch, in London, in 1963, and in 1965 upgraded its New York office to a branch. Many more overseas offices were opened during a major international expansion in effort in the 1970s. In the 1980s, expansion focused on North America, with several offices opening throughout the United States and subsidiaries established in California, New York, and Canada. 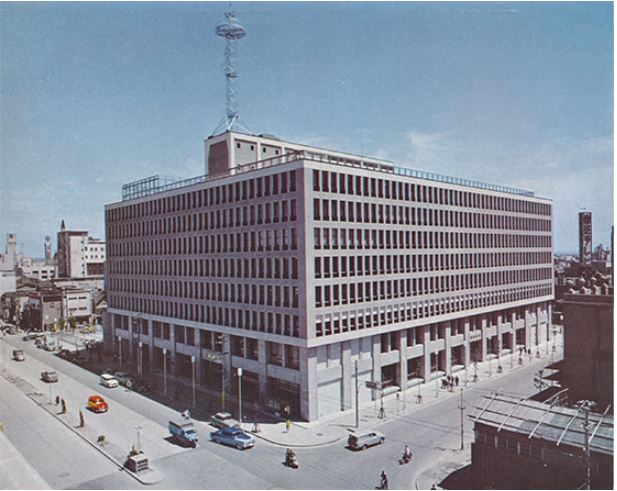 In the late 1980s, Tokai concentrated on consolidating its position with middle-market companies, offering these companies services that were once available only to large corporations. In 1988, three regional headquarters were established for the Americas, Europe and the Middle East, and Asia and Oceania.

During the late 1980s, soaring land prices in Japan and speculative property loans led to a financial bubble that burst in the early 1990s, leaving many banks with unrecoverable loans and creating chaos and recession in the nation's economy. Mitsubishi Bank and the Bank of Tokyo had escaped the troubles relatively unscathed because of prudence and caution in their business practices.

The Bank of Tokyo-Mitsubishi, Ltd. 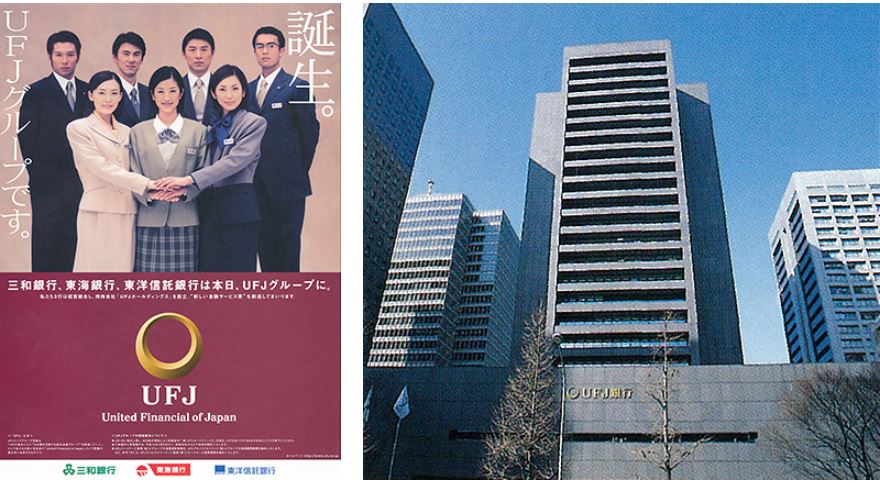 In 2002, as part of continued restructuring of the troubled Japanese financial system, Sanwa and Tokai , along with the Toyo Trust & Banking Co., merged into UFJ (United Financial of Japan), consolidating rapidly by writing off bad loans and reducing the number of branches and employees.

The Bank of Tokyo-Mitsubishi UFJ, Ltd.

In 2006, BTM and UFJ merged to form the Bank of Tokyo-Mitsubishi UFJ. 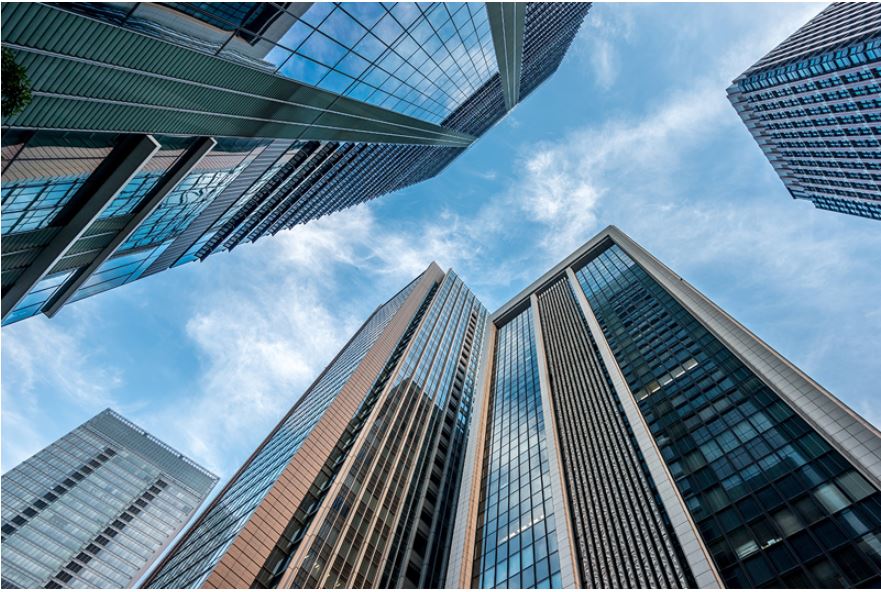