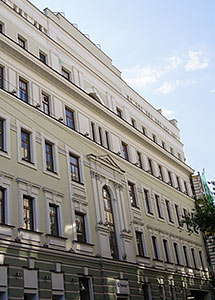 MUFG opened a Representative Office in Moscow in 1992, soon after the founding of the Russian Federation, and the Bank's subsidiary AO Bank of Tokyo-Mitsubishi UFJ (Eurasia) was established in the city in 2006. In 2008 a representative office opened in St. Petersburg, and in September 2012 a sub-branch opened in Vladivostok.

Russia has abundant natural resources, with the world's largest natural gas and iron ore reserves, as well as its largest oil production. Today Russia is the world's ninth-largest country by nominal GDP, and the sixth-largest by purchasing power parity and automobile sales. Russia is expected to top three million units in automobile sales and is expected to catch up to Germany as Europe’s number-one car market. The Bank received a capital increase of approximately 20 billion yen in June 2012, tripling its capital, and will continue to provide our customers with top-quality financial services.